Earlier this week, Nike celebrated the 30th birthday of their Just Do It campaign by using NFL star Colin Kaepernick in their latest ad campaign. The former San Francisco 49ers player in the National Football League, had stirred a huge controversy after he demonstrated his protest against racial discrimination by kneeling down during the country’s national anthem. The ad campaign features Kaepernick with the slogan “Believe in something. Even if it means sacrificing everything.” 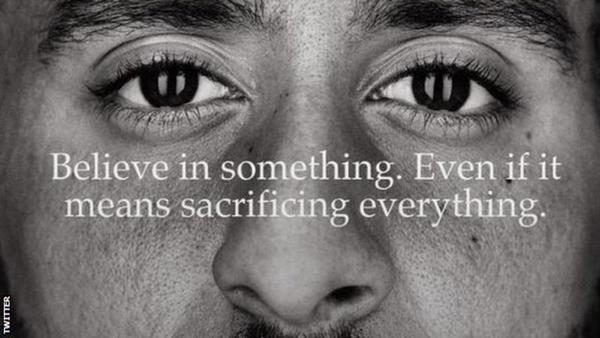 The ad received instant widespread controversy, with the likes of Donald Trump speaking out against the decision and stocks down approximately 2-3% over the days that followed. Nike’s strategy risked alienating countless consumers, mainly in Middle-America, who believe the national anthem protests that Mr. Kaepernick began are disrespectful. Within minutes of announcing their decision, #BurnYourNikes was trending on Twitter, with people calling to boycott Nike purely to make a political standpoint.

So why would Nike, a leading multi-billion dollar company, risk aligning their brand with something as controversial as the question of American patriotism? It is always about selling sportswear, even when it’s really not. Nike did not go into this with their eyes shut. Nearly two-thirds of individuals who wear Nike in the United States are under 35 years old, and are much more racially diverse than previous generations. Indeed, on social media — where the nation’s youth live and breathe — Mr. Kaepernick attracted more than one million responses on Instagram, Facebook and Twitter in the hours after he announced the Nike partnership, according to ListenFirst.

Gino Fisanotti, Nike's VP of Brand stated: "We believe Colin Kaepernick is one of the most inspirational athletes of this generation, who has leveraged the power of sport to help move the world forward." The fact is, young people are more clued up than ever before; and isn’t it great that they idolize a celebrity who chooses to use his visibility and platform to actually give a damn and to speak into something more important than sport?

To Millenials and the Gen Z demographic, being woke is a breath of fresh air. It’s no longer considered acceptable to be racist, homophobic, or ignorant (was it ever?) and the backlash Nike faced from Trump only reiterates this point. If Trump is the antithesis of cool, then this is the ultimate act of woke, right? And ultimately, this will sell shoes.